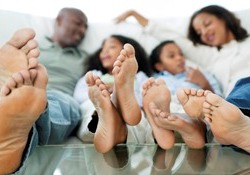 Barbara and Larry Marter met through friends. Although they did not hit it off immediately, it did not take long for their relationship to grow serious. Both of them had been married before and each had children from previous marriages (ages 6, 9, 12 and 15). As they spent time together, they discovered they both were looking for someone who would be committed to a relationship and not be afraid to deal with all of the issues surrounding bringing two families together.

“We knew we wanted to be together, but we weren’t sure how the children would take to the idea,” said Mrs. Marter. “We planned outings that involved both families so we could see how they would get along. Nobody seemed to hate anybody so we thought we were safe. Prior to getting married we talked about discipline issues concerning the children, but other than that we really didn’t make a plan for bringing the families together.”

Research shows that 1,300 stepfamilies are formed daily and 500,000 adults become stepparents each year. One out of three Americans is now a stepparent, stepchild, stepsibling or some other member of a stepfamily. Most of these stepfamilies are formed with little to no advance planning about how these two families will successfully come together. The Marters can attest to the fact that TV shows like The Brady Bunch or Step by Step don’t come close to portraying real stepfamily living.

“The kids were wonderful during the engagement,” noted the Marters. “It was after we tied the knot that the real stress hit. The children really began to show their true colors. We have faced numerous challenges during the almost 17 years we have been married.”

“We know that 60 percent of all remarriages end in divorce,” said Elizabeth Einstein, nationally known stepfamily expert. “This statistic does not have to be that high. There are ways that couples can prepare for remarriage that will significantly reduce their risk of divorce.”

Einstein suggests the following for couples planning to enter into a stepfamily situation:

Recognize and deal with the losses – it is important to validate losses for all of the individuals involved.

Develop a solid couple bond – Make sure you have dealt with the baggage from your previous relationships so you can focus on making this relationship work. Establish clear guidelines for dealing with ex-spouses, finances, and the challenges of step parenting, including personal space for children who may not be living with you, BEFORE the wedding.

Involve the children – Be intentional about bringing both families together to get to know each other. Keep the lines of communication open with the children so they know what is going on. Some couples include their children in the wedding.

Discuss your discipline strategy – Agreement on how discipline will take place is critical. Stepparents should take on the role of discipline with stepchildren very slowly.

Accept continual shifts in the household – Due to the uniqueness of your new family, it will take time for people to feel secure. You must recognize that there will be some things that happen that are totally beyond your control.

Remember there are no ex-parents, only ex-spouses – No matter how strong your feelings may be about the other parent, they are still an important part of your child’s life.

The Marters believe it was the strong foundation they had laid going into the marriage that has kept them together.

“When we made the commitment, we made it for life,” said Mrs. Marter.

“There were times that we felt like we were hanging on by a thread, but we have made it.”

For more information about building strong stepfamilies, go to www.stepfam.org

Get tips on relationships, marriage, family, and more with our monthly email.