What to Call a Stepparent

Home / Educational Content / Articles / What to Call a Stepparent 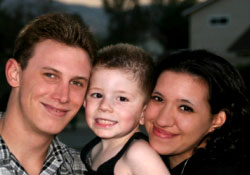 “This is my stepmother/stepfather.” Cue awkwardness on the part of the child. Cue inward cringing in the stepparent. Cue mental “demotion” in the eyes of the outsider.

Alternatively, if a child refers to his/her stepparent simply as his mother or father, a similar series of reactions may occur. Cue fears of disloyalty on the part of the child. Cue mixed emotions in the stepparent and his/her spouse. Cue jealousy on the part of the other biological parent. And cue confusion on the face of the outsider trying to make sense of the relationships.

Despite the prevalence of stepfamilies—an estimated four in 10 Americans consider themselves part of one—stepfamilies often still face insecurities. Part of the tension stems from the name “stepparent,” which can sound like a step down from being a “real” parent. Some feel the term “step” has indelible negative connotations and should be avoided. Indeed, using the terms “mom” or “dad” instead can sometimes help facilitate bonding between a child and a stepparent. However, making the transition from “stepparent” to “parent” is not always an easy one, in name or in practice.

Below are some of the challenges children, stepparents and biological parents often encounter when it comes to traditional naming conventions.

The Stepfamily Dilemma: What’s in a Name?

The term “blended family” is sometimes preferred to “stepfamily.” It carries less stigma and feels more inclusive. However, the term doesn’t really work for individuals—“This is my blended father/mother” just doesn’t sound right. So families are stuck with the same dilemma of what to call a stepparent.

The likelihood of a child referring to his/her stepparent as “mother” or “father” is influenced by a number of variables including:

Understanding All Points of View

A child initially may resist calling a stepparent “mom” or “dad.” The term shouldn’t be forced upon a child, especially early in a marriage. The intimacy behind the words takes time to develop; applying it too early can feel unnatural and create resentment. Even after a child fully attaches, he or she may still feel disloyal to the other biological parent if he/she refers to the stepparent as a parent. And while most people marry with the intention of sticking around, this obviously doesn’t always happen. Children who have already seen their parents’ relationship end are naturally wary that the same thing might happen again. For this reason, children often keep their guard up for months or even years. Even when a child has embraced the title of mother/father for his stepparent, he or she may shift in and out of using it, if only to clarify things for the outside world or to “punish” their stepparent when he/she is upset.

Sharing the title of “mom” or “dad” can be disconcerting to the biological parent. No matter how devoted a stepparent is, the relationship between the biological parent and his/her child is unique. Most children also recognize this bond as irreplaceable, so there’s no need to feel threatened by your child’s relationship with his/her stepparent. Children in stepfamilies (particularly those who split their time between households) must operate in multiple “realities.” The rules of these environments differ, requiring adaptability on the part of the child. Most children refer to their stepparent by their first name, at least when speaking about him/her to the biological parent. However, if your particular child doesn’t—or if he/she makes an occasional slip—try not to take it personally. Keep in mind not only how the terminology makes you feel, but how it impacts your child’s ability to cope in his/her dual worlds.

Being the new parent on the block can be a challenge. Not all stepparents necessarily want to be referred to as “mother” or “father.” But if you would like your stepchild to call you as such, discuss the situation with your spouse to determine the best approach. Some children naturally begin adopting the term; others may need to be given “permission.” Make sure the child knows that while you welcome him/her calling you mother or father, you understand and respect whatever they are comfortable with. In order to feel safe referring to you mother or father, your stepchild will need to sense that you have a similar level of affection for him/her that his biological parents share.

Ideally, both stepparents and biological parents can lay aside their personal naming preferences and go with what the child is most comfortable with. Stepparents who continually demonstrate their love for their stepchildren over the years will eventually be seen as parents … even if they are not always called such.