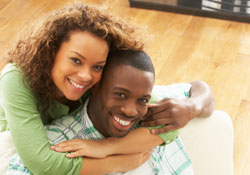 That’s the stereotype, at least. Just the opposite may be true, however, in terms of what makes for a happy, lasting relationship. According to a recent study by the Kinsey Institute, frequent kissing or cuddling appears to be more critical to men than women in long-term relationship satisfaction.

“In some ways, this is not terribly surprising to people who study love and sex,” says Debby Herbenick, Ph.D. “Although women are sometimes stereotypically described as the gender that most loves to touch and cuddle, the fact is that women often have more opportunities for human touch than men do in many cultures.” Women may engage more freely in affection with children, friends and even pets. Relative to women, men may feel that they have fewer socially acceptable forms of physical interaction with others. This could help explain why men may experience a greater boost of satisfaction in their relationship through the acts of kissing and cuddling than women do.

Still, physical contact is important to both genders. Both men and women reported greater satisfaction with their sex lives when kissing and cuddling — as well as sex — occurs frequently.

Some people have a difficult time being physical with their spouse/partner when they do not feel emotionally close to him or her. While this reaction is certainly understandable, avoiding physical contact may actually deepen this sense of estrangement. Physical affection releases the feel-good hormone, oxytocin, the so-called “cuddle chemical.” This, in turn, promotes bonding between a couple. So, if you are feeling a little distant from your spouse/partner, one of the best things you can do to counteract that emotion is to engage in some form of affection with him or her.

In an article in Psychology Today, Marnia Robinson and Gary Wilson describe how affection can help a couple bond, describing it as the “lazy” way (i.e., a relatively effortless way) to stay in love:

There are some curious aspects to bonding behaviors. First, in order to sustain the sparkle in a relationship these behaviors need to occur daily, or almost daily. Second, they need not occur for long, or be particularly effortful, but they must be genuinely selfless. Even holding each other in stillness at the end of a long, busy day can be enough to exchange the subconscious signals that your relationship is rewarding. Third, there's evidence that the more you use bonding behaviors, the more sensitive your brain becomes to the neurochemicals that help you feel relaxed and loving.

In the study, greater relationship happiness was noted in couples who scored themselves higher on several sexual functioning questionnaires. Men in particular were likely to be happy in the relationship when they were in good physical condition. Participants in the Kinsey study were 40- to 70-year old heterosexual couples who either were married or who had lived together for at least one year.

Clearly, the bond between physical affection and overall relationship satisfaction is a close one. So slide a little closer to your spouse/partner on the couch and make room for the deeper intimacy affection can help create in your relationship.